Somehow, some way, I managed to put around 800 miles on the bike during the first week of ownership. A few good rides, some commuting, and some dyno time. The honeymoon doesn’t appear to be waning. Rather, it’s intensifying. I’d like to scrounge up another $13k so I can buy a second bike – this would give continuous ride time while the first bike is disassembled for R&D, maintenance, etc. Joking aside, I love the bike. As I mentioned earlier, it’s they combined the best features of a Speed Triple, an FZ-09, and a VFR and then improved on it a bit more. The more I ride it, the more in love I become. Nice job Yamaha!

The objective for the dyno was pretty straight-forward: determine what differences (if any) exist between the various ride modes and traction control settings. The three modes felt identical in power output, but clearly the throttle maps vary. The FZ-09, by contrast, reduces power by approximately 10% in B mode (the softest map on that bike).

As (unfortunately) expected, the stationary front wheel disabled the TC system and tripped a CEL. So, no way to quantify the effects of TC on power output. Until we figure something out…

Otherwise, we did about 5 runs per mode. What you see here is the best of each mode. 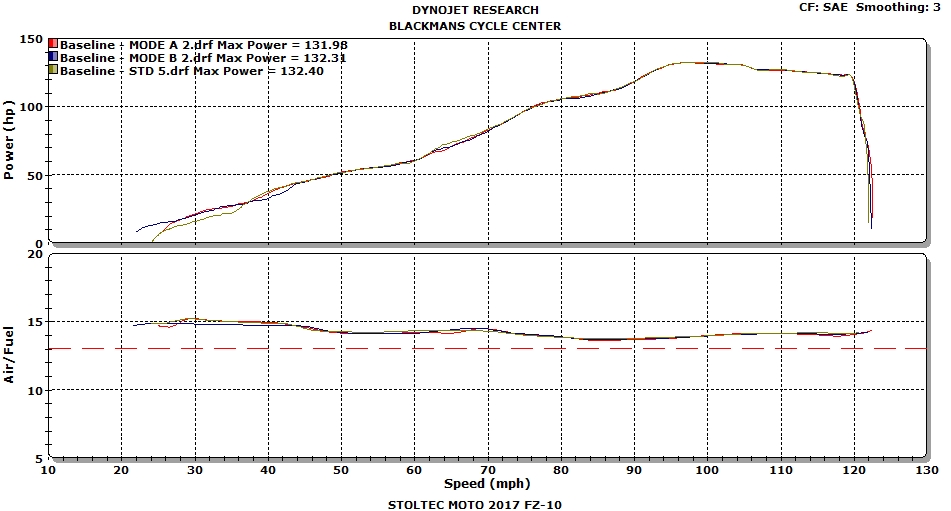 Unfortunately, time was limited and we didn’t have enough left to access an ignition lead to pull RPM (and torque). However, I was able to back-calculate the RPM based on wheel speed and obtain torque readings as shown here. Please be aware that the RPM and torque trace are calculated!! There is some inherent error in the dyno, with the actual circumference of the rear tire, etc. This is only shown to give a feel for the actual torque curve. So reader beware! 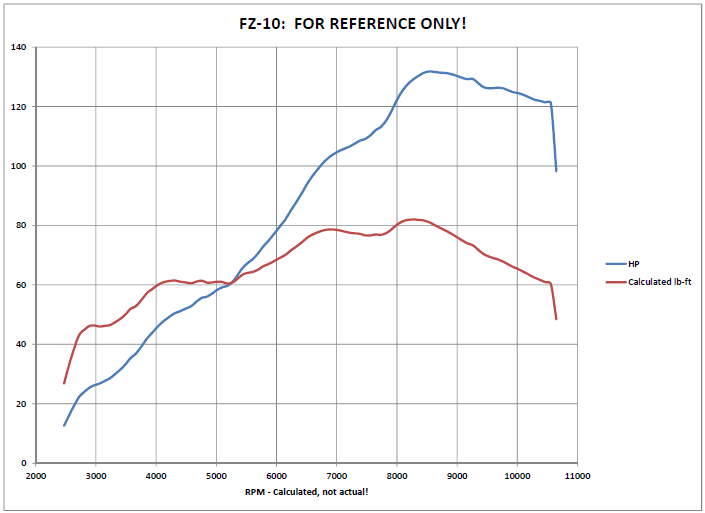 The curves passes the sniff test based on my seat of the pants. Torque picks up pretty strong at ~4,000 RPM which matches the feel from the saddle. From there, the bike makes about 75% or more of its peak torque to redline. There are a couple bumps along the way, but the ~8,000 RPM peak matches up with the reality-distorting rush from the saddle. But again, reader beware – this data was calculated!

For reference, a stock FZ-09 puts out 104 whp on the same dyno. This number is well within the expected range. As such, it’s a little confusing that the FZ-10 is putting down the power that it is. Euro MT-10’s have pulled numbers in the 138-140 whp range, but I’ll withhold judgment until we get more data (both MT and FZ). One data point it hardly a trend, but a 160 hp (crank) bike typically puts out more power at the wheel. A stock 150 hp Ducati MTS 1200 makes about 130 hp at the wheel.

Before the topic gets sidetracked, let’s avoid discussions of dyno error, operator error, etc. until we have more data from other bikes on both sides of the pond. Hopefully, this power rating doesn’t follow in the footsteps of the 2006 R6 redline debacle. Perhaps the output is a function of some TC/CEL do-loop trickery…

Either way – the bike rips. Numbers be damned.